Worries over electronic waste from the developing world

Millions of computers heading for unregulated recyclers could poison water and soil.

Public-health problems and environmental degradation caused by recycling of old computer equipment could skyrocket in the next two decades, as increasingly wealthy consumers in countries such as India and China ditch their obsolete hardware.

Within six to eight years, developing countries will be disposing of more old computers than the developed world, suggests a study published today in Environmental Science & Technology1. And by 2030, these nations will be disposing of two to three times as many computers as the developed world, perhaps resulting in up to 1 billion computers being dumped worldwide every year — up from a global total of around 180 million units per year now.

What this means, says study author Eric Williams, an environmental engineer at Arizona State University, Tempe, is that even if the flow of obsolete computers exported from the developed world for recycling is completely shut off, the developing world will still have to cope with a massive amount of domestic electronic waste.

The problem comes from efforts to reclaim precious metals from circuit boards and wires using “very primitive” methods, Williams says. To obtain copper, for example, informal ‘backyard’ recyclers in the developing world simply burn off the insulation, producing a host of toxic chemicals from the burning plastic. And to obtain gold and other metals from circuit boards, they simply treat them with litres of nitric acid and cyanide. “There’s no proper way to dispose of the waste acid and cyanide, which ends up being dumped into local water or soils,” Williams says.

To estimate how many domestic computers the developing world will be adding to the current stream of electronic waste from the developed world, Williams and his colleagues looked at computer sales data from the International Telecommunication Union, an agency of the United Nations headquartered in Geneva, Switzerland. This allowed them to assess how quickly computers are being adopted by people in various countries. They then factored in the average computer’s lifespan to come up with estimates of how many would be sent for recycling. 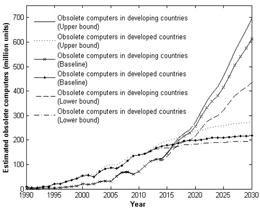 Click on image for a larger version.J. Yu et al.

Forecasts like this, Williams admits, are subject to uncertainty — if only because they assume that no new invention will supersede computers. “But it has worked quite well for other technologies,” he says, naming refrigerators, televisions, mobile phones and washing machines as examples.

“For me, this was a surprising result,” Williams says. “The big take-home message is that if we want to deal with the environmental problem, the trade bans we’ve been working on just aren’t going to work.” Nor, he argues, will it help to take toxic materials out of computers in the future, unless developing-world recyclers change their methods. “The toxics generated in the recycling processes were not originally present in the equipment,” he says. “It’s a problem in the recycling process, not the product.”

Ted Smith, chair of the Electronics TakeBack Coalition — a non-governmental organization in San Francisco, California, that campaigns for responsible recycling within the computer industry — sees Williams’s projections as an important finding. “The numbers are staggering,” he says, especially considering that the study dealt only with computers. “When you add in televisions, cell phones, MP3 players, faxes, copy machines — everything else — you’ve got to multiply it by several times to get the overall picture.”

But environmental campaigner Jim Puckett thinks that the latest study simply “states the obvious”. Puckett, who co-founded the Basel Action Network in Seattle, Washington, to promote the Basel Convention — an international agreement that controls trade in hazardous waste — says that the study deflects attention from current problems.

“Right now, overwhelmingly, the feedstock for this informal recycling is exports from developed countries,” he says. “It’s pouring in by the truckload every day. This study is doing a huge disservice to those who want to enforce the Basel Convention.”

Even if locally generated electronic waste increases, he says, today’s flow of waste from the developed world allows backyard recyclers to outcompete anyone attempting to do a better job. “Until you stop that cheap and dirty dumping, we’re never going to create good infrastructures for recycling,” he says.

Williams agrees that improved recycling processes are key, but thinks that it is important to work within the affected countries themselves. He and his team are now preparing a paper on proposals to buy up used circuit boards and wiring to send them for processing at facilities that have better environmental controls and more sophisticated techniques for recovering precious metals. “We’re doing economic analyses of this idea,” he says. “It looks like it’s a pretty cheap system to implement.”