E-wastes, a threat to public health 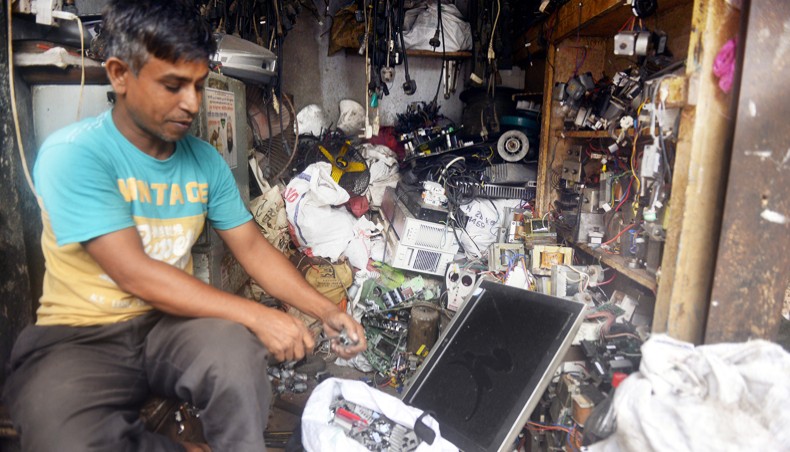 Gross negligence of electronic and electrical waste management created serious health and environmental hazards in the capital and elsewhere in the country.
The problem became widespread due to users leaving the wastes, generated by increasing use of electronic and electrical appliances, in open spaces.
City corporations and municipal authorities are not even aware about massive electronic an electrical wastes being left in open spaces in the capital and elsewhere in the country every day.
The civic authorities, however, don’t feel worried about the need to allocate resources or develop the manpower for safer disposal of abandoned noxious wastes considering that they were being recycled in Bangladesh.
But they know that abandoning out of order electronic and electrical appliances, or their parts, and leaving them in open spaces increased at a rapid pace in Bangladesh like just other countries.
Officials of Dhaka South City Corporation and Dhaka North City Corporation told New Age said that they attach no priority to disposal of electronic and electrical wastes as with their existing manpower and resources they can collect and dispose of hardly a half of the capital’s domestic wastes.
As DNCC has no separate mechanism for disposing of e-wastes, they are usually dumped with domestic wastes at the Amin Bazaar Land Fill, said DNCC chief waste management officer Commodore MA Razzak.
Similarly, DSCC also has no system in place to separate e-waste from the other municipal wastes, said DSCC chief waste management officer Shafiqul Alam.
But, environmentalists expressed serious concern over such handling of e-wastes containing mercury, lead, cadmium, zinc and other hazardous elements that don’t get dissolved.
They said that abandoned computers, mobile phones, electric cables, TV sets, coffee machines, fridges, air conditioners, photo copiers, ATM machines contain these and other hazardous elements.
Department of Environment director Mirza Showket Ali said that as heavy metals in e-wastes were harmful for health, environment and ecology, framing the rules for safe e-waste disposal by the DoE was underway.
Hazardous elements in e-waste might cause kidney damage, cancer, asthma, nervous breakdown, early hair fall and other serious diseases, said Bangabandhu Sheikh Mujib Medical University hepatology professor Mamun Al Mahtab.
They also might cause infant-mortality and disabled births, according to a 2010 study on e-waste done by the Environment and Social Development Organization, in short ESDO, with regard to the Bangladesh situation.
The same ESDO study says that roughly 28 lakh tonnes of e-waste is generated in Bangladesh annually.
According to Global Partnership on Waste Management, e-waste is one of the fastest growing waste streams in developed as well as in developing countries as the lifespan of the devices shrinks in response to demand for the newest and best choice of the consumers.
Waste Concern executive director AH Maqsood Sinha said that e-waste might be more severe in Bangladesh in the near future as the number of users of electrical and electronic appliances was rising very rapidly but neither the government nor the producers were yet to take any initiatives for their safe disposal.
A study conducted by Waste Concern consultants on e-waste in Bangladesh for the Japanese recycling firm, Re-Tem Corporation with support from JICA, in 2015 found that the use of electronics and electrical items was rising in this country by 10 to 20 per cent per year.
In the capital slum children are seen collecting e-wastes for recycling by cottage factories in small rooms, New Age visited many of these recycling factories at t Nimtali, Kamrangirchr, Islampur, Dholaikhal, Jinjira, Mohmmadpur , Mirpur and other areas in the capital.
Recycle factory workers said that 20 to 30 per cent of e-wastes were recycled and the rest was dumped in landfills, rivers, drains, lakes, canals and open spaces.
According ESDO report at least 50,000 child workers are involved with e-waste collection and with the recycling process and over 15 per cent of them die during recycling and its after effects and over 83 per cent of them fall sick due to exposure to toxics substances.
According to the UN Office on Drugs and Crime Experts, developed countries dump millions of tons of electronics items in developing countries every year violating ‘The Basel Convention on the Control of Transboundary Movements of Hazardous Wastes and their Disposal,’ adopted in 1989.
Experts said that ‘Import policy Order 2015-2018’ puts an embargo on import of the reconditioned or second-hand items but a number of syndicates in co-operation with government officials continue to import them.
Once, the UN Environment Programme research warned that the involvement of transnational criminal gangs would increase due to the use of such electronics items.